Victoria Fyfe knew from an early age that she wanted to live a life that was caring and compassionate, but it was only as she grew up and thrived that she began to understand that she could inspire others and shape the course of her profession as well. 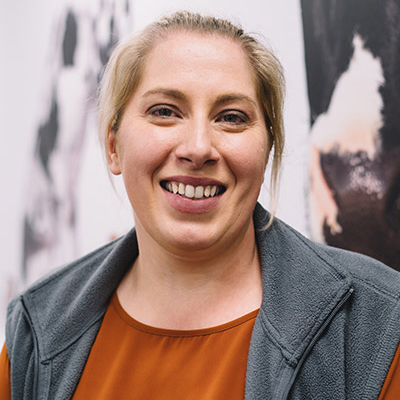 Growing up in the North East, Victoria’s dad was a marine engineer, but had a major accident when Victoria was ﬁve. An explosion at work left him disabled, and changed the family’s life. Victoria said they had caring in their family DNA anyway, but friends in the local church “were like a second family, and did so much to instil core values in me, a good grounding and a moral compass.”

As an animal-loving kid, it seemed only natural for Victoria to do work experience at Prince Bishop, the local vet practice, and, working there while at college, she got a contract as a nursing assistant and has never looked back. She became head nurse, and then when the practice was taken over by Vet Partners, she took on an enhanced role. Now she works to help the group meet the Royal College’s Practice Standards Scheme by going into different operations to offer guidance and assessment.

A key ﬁgure in Victoria’s development from thoughtful teenager to a leader and mentor to those around her has been Jacqui Molyneux.

“She was the owner of Prince Bishop and someone who became a role model from the age of 18, when I started there. She is a very strong, independent female, she had a family, she created her own business,” explained Victoria. “She was always very forward-thinking. She would just not let anything stand in her way. A lot of businesses, they do well, then they plateau, but she always wanted to do more, to learn more for herself, to develop and never stagnate.”

Jacqui also spotted qualities in Victoria and gave her the opportunities to grow, sending her on a Rotary Club young leadership course, where Victoria was named the best student. For Victoria, that sort of independent validation was a big factor in helping her to develop her conﬁdence, and she recalls to this day how impactful such praise can be for a youngster.

“Because it is such a busy profession, it’s hard to remember that sometimes all it takes is a ‘well done’ or ‘get in’ to boost someone and let you know that you believe in them,” she said. “And that pays off in the long run: you’re better off having one person who really cares than ﬁve people who don’t want to be there. This is emotional and stressful work, often understaffed, and I think we could improve on the way we support people.”

“I’m down to earth and approachable so when I go into practices I hope people can see that they are valued as individuals and that we can help them shine. I am passionate about the development of the veterinary world and believe in practices setting high standards. And especially about the Veterinary Nurse title: I would love to see that protected, more recognition for everything we do, because, as it stands, anyone could call themselves ‘veterinary nurse’.”

When the practice was taken over, Victoria had the chance to step up to the business and managerial side, as well as being head nurse. This challenged her to blend her compassion with practical decision-making.

“I think I was probably very naive when I was younger, but as you grow you take the rose-tinted goggles off and you realise that people do have to make decisions that you yourself may not think are caring. You have to accept this is a business. I kept my core values, but there is a balance with realism and compassion.”

There was some surprise at Prince Bishop when the practice was sold, and it was part of Victoria’s role to keep spirits up, reassure the team and motivate them. She believes that the takeover has opened up a lot of opportunities, not least the chance to have an impact on more practices than her home base.

“I’m down to earth and approachable so when I go into practices I hope people can see that they are valued as individuals and that we can help them shine. I am passionate about the development of the veterinary world and believe in practices setting high standards. And especially about the Veterinary Nurse title: I would love to see that protected, more recognition for everything we do, because, as it stands, anyone could call themselves ‘veterinary nurse’.”

“We are front of house, we are empathetic and we deal with grief. We are giving advice to clients with new animals, we are radiographers, phlebotomists and more. In a human hospital that would be four or ﬁve different teams of people! People do not understand how much we do.”

Still not 35, Victoria has many goals for how she can further the profession of veterinary nursing, but also keeps her focus on the people around her. “With my nurses, I aim to motivate them, to guide them, to give them a role model. Because I worked my way up from the bottom, so I am here to say to them ‘it can be done’.”

Watch Victoria give an overview of what leadership means to her in this 1-minute video: