Matthew Rendle was a shy kid who was on a bad path until a creative intervention propelled him into a lifelong fascination with exotic animals, and a career as a somewhat rare species himself: a male vet nurse. 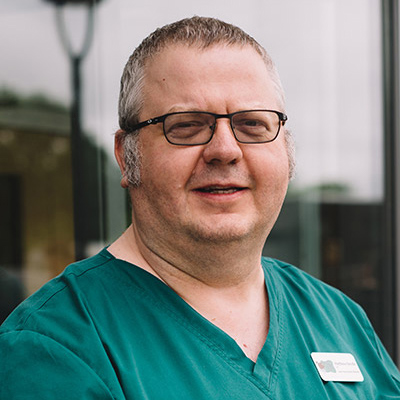 Growing up in Bushey in Hertfordshire, Matthew says that he was bullied and was missing large chunks of school by his mid-teens. “But then I had a really good teacher who could see that I was going off the rails. Mick Swift was his name: he pulled me aside and said have a day off school every week, and just go and ﬁnd something you enjoy, and think you might like to do as a job.”

Matthew loved snakes and lizards, and had kept reptiles since he was young. A family friend got him work experience in The Park vet practice where, as luck would have it, there was some interest in exotics. It proved to be the making of him. “I saw the nurses and saw how amazing they were and saw all the cool stuff they did, and I stayed there for a year on day-release. I did my GCSEs and then they offered me a position as trainee nurse.”

“Emotional intelligence, it’s not something you get taught how to have. It is a hard thing to acquire.”

He ﬁtted right in at a practice where partners Chris Sander and Bill Starr were both supportive, and passionate about bird and reptile care respectively, and Matthew was particularly struck by how they trusted him to take on responsibilities. Matthew started there in 1989, became senior theatre nurse in 1994, and then what looked like a dream job came up at a world renowned zoo in 2003. “It was a great job in wildlife and exotics nursing: there were so many fascinating cases, and the job came with a lot of kudos and status. I was well-respected, I’d done lots of really cool things. I had loads of that kind of adulation. But you can end up getting swept along in a job like that and it took me a while to realise that it was compromising my wellbeing,” he said.

Matthew, 46, was not in a good place and decided that he had to leave the Zoo. But, unhappy though this period of his life was, for him he believes that it has given him empathy, insight and emotional intelligence that he can bring to bear as he leads a team of 25 nurses in a busy practice in Leeds today.

"I have learned from my own experiences that everybody deals with situations differently. So for instance, somebody who is consistently late, instead of saying ‘why are you always late?’, you ask them ‘are you okay?’"

“I work with a great bunch of nurses, and there is a huge amount of diversity within the group. They have a lot of the worries and the angst that I had in training at the start of my career, but there are additional pressures on them too. Where we used to have little green books that you would get your progress signed off in, now with social media they can all contact each other and measure their progress, how they are doing against each other, and that – even though people are not doing it deliberately at all – creates stress.”

Matthew sees it as part of his role to encourage and to monitor the team’s progress, not just clinically but in the broader pastoral sense.

“This is not a straightforward profession: some people glide across it and it never really affects them, but a lot of people struggle with it. I have learned from my own experiences that everybody deals with situations differently. So for instance, somebody who is consistently late, instead of saying ‘why are you always late?’, you ask them ‘are you okay?’ And then they might open up about what is going on. But emotional intelligence, it’s not something you get taught how to have. It is a hard thing to acquire.”

There are not many male veterinary nurses in the UK: Matthew was in fact just the 23rd to qualify. He would like to see advances made to rectify that imbalance, and sees it as part of his role to communicate to the Veterinary Nurses Council of the RCVS, of which he is a Council Member, the preoccupations and concerns of in-practice vet nurses.

“It can be tough at times being in such a minority. It’s silly things you remember, like I was the only boy in my exams so they had to get a special invigilator just in case I needed to go to the toilet. At the beginning of the exam, when I’m nervous and self-conscious anyway, and the examiner shouts ‘Matthew? Matthew? Where’s Matthew?’ Then she said, ‘oh, Brian’s here’ and there was this old guy in a tweed coat. ‘Brian’s here. If you need to go to the toilet, Brian will go with you’.”

Matthew declined that opportunity, but today continues to change preconceptions and nurture the nurses around him, male and female alike.

Watch Matthew give an overview of what leadership means to him in this 1-minute video: