From attending a traumatic equine accident at 12, to fracturing her skull on her 18th birthday, to nationwide recognition as an LGBT+ leader while still an undergraduate: Hatti Smart has displayed extraordinary resilience throughout her life. 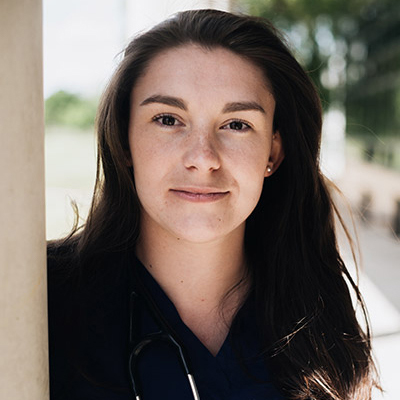 Hatti Smart’s ﬁrst introduction to the world of veterinary work might never be added to the suggested curriculum in colleges, but for this emerging young leader, it certainly shaped her view of the profession.

“When I was 12, I was in the stables near where I grew up in Stourbridge and someone came in to say there was a loose horse on the road,” she said. “A lady who was out riding had been hit by a car, and the guy had driven off. She had been seriously injured.

“The horse had suffered multiple fractures to his left forelimb: it was completely shattered, and even though I was young I knew it did not look good for him. Even at that age, I was a realist. He was cold because he was in shock, so we wrapped him in a blanket and stayed with him, keeping him calm, for the 25 minutes until the vet arrived.

“The vet who attended, Alistair Field, was amazing: he came in and took charge of the situation but it wasn’t like someone swanning in and saying ‘oh I know everything’. He just calmed everyone down, he was so good at communicating.”

“Mental health is increasingly talked about, and with issues about diversity and sexuality I have found the RVC progressive and forward-moving.”

Alistair, who was named vet of the year by Horse and Hound last year, became a mentor to Hatti more recently and provided her opportunities for EMS. He continues to offer her advice and guidance as she completes her undergraduate studies at the Royal Veterinary College.

Hatti has already had ample opportunities to develop the resilience that she believes is vital to working as a vet, some expected, and others less so.

“On my 18th birthday, my friend dropped me on a concrete ﬂoor at my party, and I had a fractured skull through my left ear canal and bled out of my ears for two weeks. When I got back to college they said I had to reapply for another subject because getting in somewhere as a vet wasn’t going to happen. So I did a gateway course at RVC. I’ve had a few little bumps along the way, but they have just made me more determined.”

“I’m an LGBT+ person,” she said. “I identify as pansexual and I was the chair of National Student Pride. One in four young people who are homeless identiﬁes as LGBT+, so people in those groups are disproportionately affected within the population, and it is thought that this is due to issues around coming out. So we arranged a sponsored sleep out at Camden Campus and raised £2,600 in a week for the Albert Kennedy Trust, which is the UK’s leading homeless charity for LGBT+ people.”

Hatti has also served as the RVC Student Union Welfare Officer and says the issues that touch the lives of young vets might surprise some in the professions.

“Among students at the RVC, I had three people message me the week after to say they’re only at that school due to help from charities because they have faced homelessness, before university,” she said.

“For me, wellbeing is a massive part of being a leader and I think the best leaders are people that can identify situations that improve people’s wellbeing. That’s been key to everything I’ve done at the school.”

“Mental health is increasingly talked about, and with issues about diversity and sexuality I have found the RVC progressive and forward-moving, but there are ﬁnancial and political pressures people graduating today face that I don’t think were the same way back when.

“Perhaps people used to grow up with that stiff upper lip attitude, just get on with things, and people might consider that we are the ‘millennial snowﬂake generation’ that needs to get a grip. But I think we are better at discussing things and trying to identify solutions.

“And we do, because in our profession if you want to get anything changed, you need to show evidence for it.”

Recognition for that work has come in the shape of the NUS LGBT+ Higher Education Award. Hatti has used her roles beyond clinical work and training to develop listening skills that have been combined with empathy and resilience to power a passionate drive for equality.

“For me, wellbeing is a massive part of being a leader and I think the best leaders are people that can identify situations that improve people’s wellbeing,” she said. “That’s been key to everything I’ve done at the school.”

Watch Hatti give an overview of what leadership means to her in this 1-minute video: