Sarah Colegrave, the clinical director of a small animal practice in King’s Lynn, explains how she identifies each individual’s talents and develops that person by giving them responsibility. 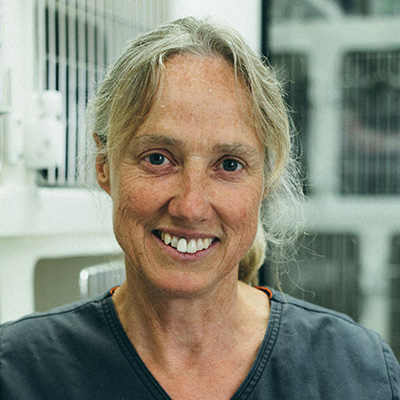 In her first job, Sarah grew in confidence quickly when the partners gave her ownership of specific processes – a feeling of endorsement that echoed memories of childhood empowerment through animal care.

“I grew up in this rather boring upbringing and it felt very claustrophobic,” said Sarah. “But an uncle had a dairy farm and it was wonderful to get out there, away from suburban Surrey and just have that freedom and space. Milking cows, seeing calves being born. I just thought it was such a privilege to be involved with animals. Cycling down to the dairy farm at four in the morning when no one else was up: it felt so grown up, so much fun. There seemed to be lots of jobs I could do, and I think as a child that feeling you’re useful and achieving something is really powerful.”

After graduating from Cambridge in 1989, Sarah went to work for David and Carole Clarke in King’s Lynn, at their progressive small animal practice which, she said, “put clinical excellence, integrity and honesty at the heart of everything.” They identified talent in her early on and gave her the freedom to grow her skills and lead projects, for instance in laparoscopy. “They had a gift for seeing different people’s strengths and letting them develop in those areas,” she said.

Sarah became the clinical lead at the practice, and when David and Carole retired they sold the practice to IVC and Sarah became clinical director. Working for a large group has allowed her to implement her skills across a much greater number of clinical cases than she would be able to see first-hand in practice, for instance, on the IVC Clinical Board and its Patient Safety Committee, the latter of which has led a project to implement an anaesthetic checklist in IVC practices and launched a patient safety award.

"I think perfectionism is a real problem, especially with new graduates who have excelled at all their exams and then come into the real world where things can’t always be done to perfection."

Talking of anaesthetics, Sarah likes to unwind with ice-swimming, and has also swum the Channel. “Challenges like that develop you and teach you to get your head in the right place. You fill yourself with positive thoughts and it is incredible how much you can achieve: far more than you thought you were physically capable of.”

However, there were stressful elements to being taken over by a corporate. “There was a lot of anxiety among staff around the takeover, and managing that change. I think the main worry was that we wouldn’t feel as if we were Mill House Vets any more. But I don’t think our clients would probably know, or, more accurately, would not mind, that we are part of a bigger group because we have kept true to the core values that made the practice what it was.”

Those values include giving responsibility and ownership at every level of the organisation, which has 13 vets and 21 nurses and student nurses. “We help people find their roles, give them opportunities to lead bits of the practice as well. You start someone with a small project to get their teeth into, and you build them up and mentor them from there,” she said.

“We have reflection meetings, where we will all get together to talk about difficult and interesting cases. We have developed a system to make this a positive learning experience: not ‘what went wrong?’ but ‘what have you learned?’"

“I am doing my surgery certificate at the moment, which keeps me on my toes. The more you learn the more you realise that there’s more you need to learn, but I think it’s vital for a role model to show that continual learning is really important.”

Sarah also has a creative leadership approach to a challenging character trait identified by many vets and those who work with them.

“I think perfectionism is a real problem, especially with new graduates who have excelled at all their exams and then come into the real world where things can’t always be done to perfection because of finances or whatever. That can be very difficult for some people. Perfectionism sounds great but people like that do need support when they first start. I mean, it’s absolutely great to find goals and go for them, but I think we’ve got to manage people when things don’t go quite so well also.”

Sarah has a solution for that in the practice. “We have reflection meetings, where we will all get together to talk about difficult and interesting cases. We have developed a system to make this a positive learning experience: not ‘what went wrong?’ but ‘what have you learned?’ And we have prizes every six months for the best-presented case. But I can’t take credit for this, it was my colleague Rhiannon Jones who came up with the idea. She’s very good at leading those kinds of things.”