Honorary Associateship of the College is a prestigious honour conferred on a small number of laypeople each year, in recognition of their special contribution to the veterinary sphere. 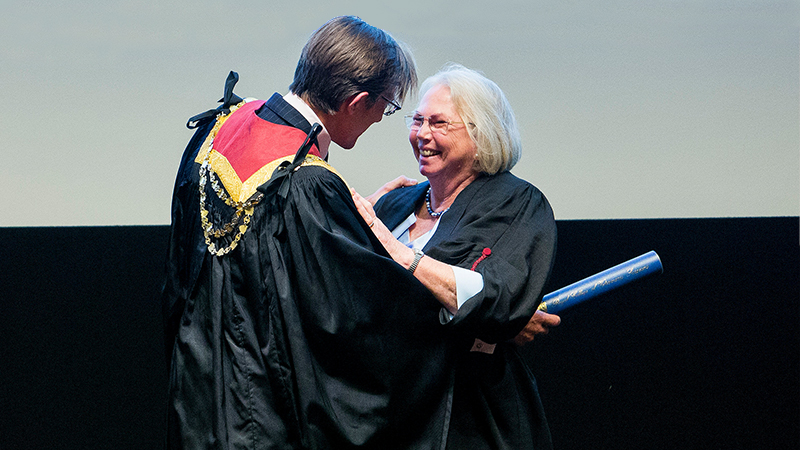 The College is keen to recognise the full range of individuals who contribute to the veterinary sphere, for example, scientists, lecturers, journalists, charity-workers, farriers, farmers and those involved in the commercial field.

Nominations can be made by any MRCVS or RVN, excluding current members of RCVS Council and VN Council. The nominations period usually starts in the autumn and closes in January.

There would not usually be more than 3 Honorary Associateships conferred per year.

The deadline for making nominations for the 2022 RCVS Honours & Awards is Friday 28 January 2022. Nominations can be made via the downloadable PDF nomination on this webpage.

Successful nominees for RCVS Honours & Awards will be invited to attend Royal College Day in July 2022.

2021: Stuart Carter, Emeritus Professor of Veterinary Pathology at the University of Liverpool’s Institution of Infection, Veterinary and Ecological Sciences, who has worked at Liverpool’s Faculty of Veterinary Science since 1985. His nominator Amy Gillespie MRCVS, a PhD student at Liverpool and European-recognised Specialist in Bovine Health Management, praised Stuart for advancing medicine greatly with achievements in wide and varied fields such as the first isolation and characterisations of dromedary camel immunoglobulins to deciphering the cause of fatal foal immunodeficiency.

2021: Anthony Martin, a philanthropist with a particular interest in supporting national and international charities working with the veterinary profession to improve animal welfare through his Anthony V Martin Foundation. His nominator Toni Cobbett RVN has worked with charities that have benefitted from Anthony Martin’s funding and said Anthony takes a personal interest in every charity he partners with and always visits them, in the UK or abroad.

2020: Professor Maureen Bain, Professor of Comparative Anatomy and Histology at the University of Glasgow’s Institute of Biodiversity, Animal Health & Comparative Medicine, and an Associate of Glasgow Vet School, for her contribution to food safety, specifically her research on improving the quality and safety of eggs for human consumption.

2020: Mike Flynn, the Chief Superintendent of the Scottish Society for the Prevention of Cruelty to Animals (SSPCA), for his collaborative work with the veterinary profession in areas such as the illegal puppy trade and the Links Group and his dedication to improving animal welfare and ending animal abuse.

2020: Professor Roberto La Ragione, the Deputy Head of the Surrey Vet School where he is also Professor of Veterinary Microbiology and Pathology and Head of the Department of Pathology and Infectious Diseases for his contribution to veterinary education and research, specifically his key role in the development of the pioneering partnership approach to education and training at Surrey Vet School.

2019: No Honorary Associateships were awarded.

2018: No Honorary Associateships were awarded.

2017: Heather Armstrong for her contribution to the health and welfare of equids as Director of the Gambia Horse and Donkey Trust.

2017: Professor Duncan Maskell for his contribution to pathogen research and animal-focused science as the first non-vet Head of the Department of Veterinary Medicine at the University of Cambridge and current Senior Pro-Vice-Chancellor at Cambridge and Marks & Spencer Professor of Farm Animal Health, Food Science and Food Safety.

2016: Professor David Lane for his contribution to the profession through his support of the launch of the Certificate in Advanced Veterinary Practice and the status of Advanced Practitioner in Veterinary Primary Care.

2015: Dr Michael J Francis for his exceptional impact on the wellbeing of livestock and pets globally through the vaccines he has developed against infectious diseases.

2015: Miss Catherine Anne Phillips for her dedication to enhancing veterinary nurse training in both the small animal and equine fields.

2015: Dr Phillip Sketchley for his tireless contribution to the pharmaceutical industry for over 30 years and for his work alongside the veterinary profession and at the National Office of Animal Health (NOAH).