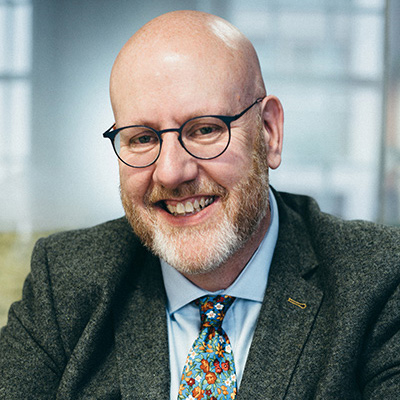 To ‘appreciate every day as it comes’. This is one of the simplest pieces of life advice to understand, but perhaps one of the hardest to master. Niall Connell, an RCVS Council Member and incoming RCVS President, has had a journey of inspiring highs, and some tough breaks as well. He has wrapped them all into a leadership style that prizes diversity, learning from colleagues of all ages, determination, and gratitude.

“My father was a ﬁreﬁghter in Glasgow, our family worked in the Clyde shipbuilding yards,” he said. “Dad was at the Cheapside Street whisky bond ﬁre in 1960, in which 19 service personnel lost their lives. He decided it was time to do something else, and trained as a teacher.

“He was just embarking on that new career, when he dropped dead at 45. Heart attack. I had just started at vet school, I was 17. Something like that, it changes you: you don’t maybe realise at the time but you do come to think you have an expiry date. I thought that would be aged 45. You really do learn to appreciate every day.”

At 22, Niall was a working vet with a son (and two more children soon on the way), and while he thinks that the rigours of training mean that vets today are “much more able and qualiﬁed” than he was, he believes he developed early the sense of perspective that family life can bring. He worked in small animal practices in Fife and London, and then back to his home city, where he was senior veterinary surgeon at the Glasgow East PDSA Petaid Hospital for 15 years.

"We need to bring a wholeness to our work, which will make things more productive and also more fulﬁlling."

In 2003, in his early 40s, he was diagnosed with multiple sclerosis. “It came about quite suddenly. There were some signs, looking back, that I probably hadn’t followed up on. I just assumed I had a brain tumour, so I was actually quite pleased when I was told it was something like MS. I thought, ‘okay I’ll take that’. Again, it’s funny because in the hospital that night there was some poor chap in the room next door and he was making this horrible noise and I said to the nurse, ‘what’s happening there?’ She said, ‘oh, that chap’s got throat cancer.’ I realised then there’s always someone worse off, always. I think I’ve had quite a good outlook on life and I’m quite positive.”

Niall carried on working for the next six years but it became physically tough. “I thought that was it, game over. It’ll be me playing the PlayStation for the rest of my life.” But a chance conversation in 2009 opened up an entirely new direction.

“Some of the young people we work with, they have different values and priorities, and those priorities are not wrong. We need to bring a wholeness to our work, which will make things more productive and also more fulﬁlling. We want people to have long, fulﬁlling careers, and it is not the linear pathway it once was. When I ﬁrst qualiﬁed 180 years ago, you were effectively in a tunnel and you stayed in it until you retired. That has totally changed."

“A veterinary nurse, Lissann Wolfe, asked me to help out doing a professionalism seminar at Glasgow vet school, and I ended up doing bits and pieces there, assessing practical exams, assessing online portfolios. I did a bit of volunteering at the local hospital, and that was interesting because it makes you realise how your vet passport is transferable, you have skills that other people recognise, outside this strictly veterinary environment. I also did a stand up comedy course for people with chronic ill-health, which is hilarious since I can’t actually stand. And then I heard about some changes that were going on with the RCVS Council, and I thought I’d like to be a part of that.”

Niall is a proud chair of the diversity and inclusion group at the College, and will focus his presidency on continuing the work of Amanda Boag and improving the diversity of the profession to reflect the wider public. He is also keen to make sure there are many different types of role model for aspiring vets to look up to and learn from.

“The world is changing,” he said. “Some of the young people we work with, they have different values and priorities, and those priorities are not wrong. We need to bring a wholeness to our work, which will make things more productive and also more fulﬁlling. We want people to have long, fulﬁlling careers, and it is not the linear pathway it once was. When I ﬁrst qualiﬁed 180 years ago, you were effectively in a tunnel and you stayed in it until you retired. That has totally changed.

“Ironically, I’m now ill-health retired, I’ve got a wee portfolio of things to do. It’s a far more healthy, interesting way of going about things. And in my case that actually happened because of MS, so therefore I cannot hate my illness because it’s opened up all these opportunities and all these experiences. I never actually thought when I had to give up work that the highlight of my career was yet to come, and it’s now, which is amazing.”