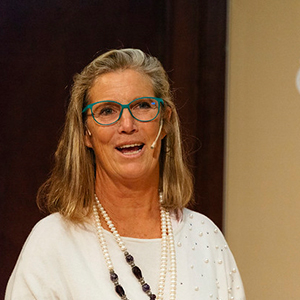 There are 110 million equids in the world, said Dr Gigi Kay (pictured), Director of an American NGO – The American Fondouk – based in Fez, Morocco. Only 15 million of these live in the USA and Europe; these are the ones ‘we know and love’, she said – the ones that suffered from obesity, were used for racing, showjumping or dressage, or that ‘spend 22 hours a day in their stable’.

In the developing world life was very different; equids were owned by ‘the poorest of the poor’ and were critical to the livelihoods of their owners. They were used in every sector that needed transport in some form, such as construction, agriculture and marketing. The United Nation’s Food and Agriculture Organization estimated that a ‘phenomenal’ 50% of the world’s agricultural traction energy was supplied by equids, she said. In comparison, the internal combustion engine supplied 30%, while human beings supplied just 8%. Therefore, the wellbeing of the working equid was intimately linked with the wellbeing of its owner and of its owner’s entire family. Despite this, almost all working equids were ‘much too small, much too skinny and much too weak to do the job that’s asked of them’.

So who was addressing the welfare and veterinary needs of these animals? The answer, she said, was not very many people. There were currently seven NGOs providing veterinary care for working equids, and six of these were British, set up by ‘eccentric British women of a certain age, who travelled the globe and had a compassion for donkeys and mules at the beginning of the last century’.

There was also a network of private practitioners, who had trained at local veterinary schools. In many of these schools, the equine curriculum was ‘at best in its infancy and at worst didn’t exist’. With the exception of South Africa, there were no equine veterinary specialists to guide the learning or training of the next generation of veterinarians at any veterinary school in Africa. There was no access to internship or residency programmes, and there was a dearth of textbooks. There was no one to refer difficult cases to or to ask for help from, and there was no CPD.

A number of organisations were looking at improving the level of care that these private practitioners could give. If animal welfare was in the hands of veterinarians, then improving their skills would ultimately improve animal welfare.

Dr Kay has been involved in improving access to postgraduate clinical training for veterinarians from the developing world for the past 20 years. About 20 young vets had been through an internship programme offered by the charity that she worked for. They spent a year working with the charity, which then sponsored them to undertake a year’s internship at either Glasgow, Edinburgh or Lyon veterinary schools. All had returned to their home countries and were now employed in positions of influence, she said. However, while the charity’s programme was clearly working, it was not enough, and it was not sustainable; a donor had to be found for every student. She said it would be better to have equine specialists in the veterinary schools in their own countries to inspire a level of excellence that currently was not possible and to set up their own internship and residency programmes.

Progress was being made, she said. One of the charity’s former interns had just started on an equine residency programme at Purdue University in the USA. It had not been possible for him to go to Edinburgh, Glasgow or Lyon because the European Board of Veterinary Specialists (EBVS) would not accept candidates whose degree was not eligible for registration in Europe and, while he had a restricted registration from the RCVS that allowed him to train in the UK, this was also unacceptable to the EBVS.

Summing up, she said that there were 833 board certified equine specialists in the USA and Europe, serving a population of 15 million equids. There was one such specialist in Africa (again excluding South Africa) with theoretical responsibility for 60 million equids.

Dr Kay called on the EBVS to be more inclusive in its approach and allow veterinarians from the developing world to pursue residencies in Europe. “I think it’s time that we opened our doors and shared our knowledge,” she concluded.