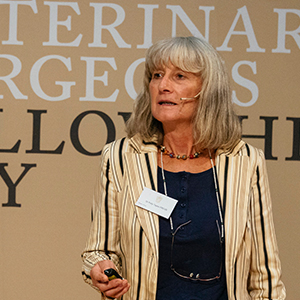 The declaration made by every Member of the Royal College of Veterinary Surgeons emphasised that ensuring the health and welfare of animals committed to their care should be their ‘constant endeavour’, said Dr Polly Taylor (pictured), an independent consultant in veterinary anaesthesia.

In the past few decades, there had been enormous advances in the medical and veterinary fields in terms of diagnosis, treatment and technology. There were many ‘very clever’ techniques that could be used in the treatment of animals; there were skilled anaesthetists and skilled surgeons, computational power was ‘immense’ and multidisciplinary collaborations were being established. “We can do an awful lot of things for our patients,” she said.

“But just because we can, does it mean we should?”

She illustrated her point using two cases that were in the public domain, asking the audience to consider whether the action taken was in the animal’s best interest and whether the procedure was recognised veterinary practice. The first case was an obese, elderly, arthritic Labrador with limited mobility. It had an osteosarcoma in one leg. The standard treatment for osteosarcoma was amputation of the affected leg, she said, meaning that this particular dog would be unable to walk afterwards. Was it in the animal’s best interests to go ahead with the surgery?

The dog did have the amputation, she said. It did not walk again and it had ‘a pretty miserable’ final few weeks of its life.

The second case was a tortoise that had three of its legs chewed off by rats and had been fitted with prosthetic legs. The process of fitting the legs had required a number of procedures over the course of several months, meaning that the animal had been unable to walk for that time, before having to become accustomed to its artificial limbs. Was the procedure really in the animal’s best interests? Was it recognised veterinary practice? Was it something that vets should be doing?

Unlike medics, vets are ‘privileged’ with euthanasia, said Dr Taylor. Euthanasia was not failure, she said. There were times when it was the appropriate treatment.

The objectives of the RCVS Fellowship were to advance veterinary standards and to be a resource of independent knowledge. The Fellows, she said, were the experienced members of the profession, and they should be ‘the movers and the shakers’ behind what was happening to it.

She believed that vets had a duty to put their patients’ interests first. Fellows had a duty to not let the profession ‘get carried away with the clever stuff that doesn’t actually benefit the patient’. There was ‘wonderful clever stuff out there’, she said, which could be used to benefit patients but “please can we use our expertise and all this technology for the good of our patients and not just for gimmick.”

She stressed that she was not saying that new technology should not be used, but rather that it should be assessed before it was used, to see if it was appropriate. This process should involve review of its scientific plausibility, peer review, ethical approval and the establishment of planned stopping points for a procedure if something went wrong, as well as ongoing audit. Such a process was already in place for laboratory animals under the Animals (Scientific Procedures) Act and she believed that there was ‘absolutely nothing’ stopping it being used for ‘clever clinical treatment’.

Leadership – observations and learnings during a clinical, academic and commercial career
Print