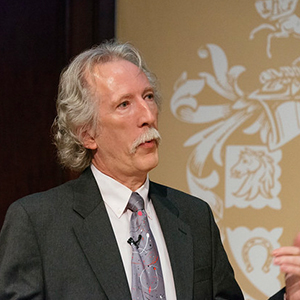 As a veterinary student, Peter Muir (pictured) – now Melita Grunow Family Professor of Companion Animal Health at the University of Madison, Wisconsin – had been taught that cruciate ligament rupture was common in dogs. The focus of the undergraduate teaching he had received had been on how to manage patients with this injury, with the emphasis on surgical approaches to treatment. This had triggered his interest in surgery and orthopaedic surgery in particular.

However, as he pursued further training, he was keen to become a ‘clinician scientist’ and began to examine the aetiology of the injury in more depth. It was clear that cruciate ligament rupture was a complex disease and that it was more common in certain breeds – for example, the prevalence in rottweilers was nearly 9%. As science had moved forward over the past three decades, it had become possible to carry out more detailed analyses and it was now estimated that the heritability coefficient of cruciate ligament rupture was about 0.3. This meant that approximately 30% of the risk of a cruciate ligament rupture was down to an animal’s genetics, while the remaining 70% of the risk was down to its environment. Understanding more about this genetic component was vital to understanding the disease.

In veterinary medicine, as in human medicine, the epidemiological and clinical knowledge of a disease or condition were often far ahead of the fundamental underlying ‘discovery knowledge’, said Professor Muir. Looking into the ‘why’ of a disease was essential – what caused it, how did it develop and, in the case of cruciate ligament rupture, what explained the 30% risk from an animal’s genetics?

Professor Muir had a particular interest in the computational challenge associated with this last element. Advances in computing power, and the compression of this power into readily accessible desktop computers, had made it feasible to start analysing the heritability of complex diseases.

Alongside the developments in computing and genomics, the identification of genetic markers and genetic technology had also ‘advanced incredibly’. At his university, it was now possible to screen a genotype array from a dog for 220,000 genetic markers for only $100. “That’s an incredible amount of data for $100,” he said.

In parallel with this, he had worked with the ‘Dog 10K Genome Project’, which was a public repository that would contain at least 10,000 full genome sequences from dogs all over the world; the aim was to have sequence data from every breed of dog. This data would be publicly available and accessible for analysis.

Taken together, the developments in computing power and genetic analysis represented a huge reduction in some of the barriers to scientific discovery. They had made it possible to start examining what lay behind the risk of cruciate ligament rupture in dogs. Professor Muir’s research and analysis had shown that there were markers for cruciate ligament rupture across the entire canine genome. A few of these markers had large effects, while the others had a moderate or only a small effect on the disease. The estimated polygenicity of the disease was ‘a few percent’, he said, which was “pretty high and generally aligned with the genetic architecture of common human complex diseases”.

This type of analysis had shown just how complex cruciate ligament rupture was and it would take a lot more investigation to examine just how a dog’s genetic architecture was connected to the epidemiology and clinical side of the disease.

Professor Muir emphasised the importance of comparative clinical research. He believed that veterinarian clinician scientists could take knowledge from human and veterinary medicine to inform discoveries that would benefit humans and other animals. “As we pursue discovery work to identify genetic loci and advance that investigation into clinical practice, then we can hopefully influence the diagnosis of disease, how to manage it and how to predict it,” he concluded.

Dealing with the worm that turned