Leadership – observations and learnings during a clinical, academic and commercial career 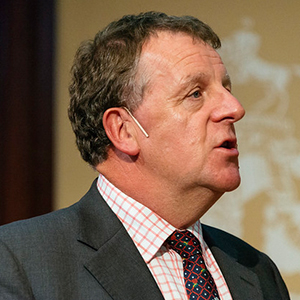 Describing his career as having been ‘somewhat schizophrenic’, Dr Simon Wheeler (pictured), a consultant to commercial and innovation organisations, said that in his journey from small animal neurologist to the veterinary pharmaceutical industry, he had ‘learned a lot about leadership’. He hoped to offer a number of observations based on his experiences.

During his time in industry, he had heard a lot about marketing strategies, he said. Marketing strategies often used the language of warfare – for example, ‘attacking’ or ‘taking advantage’ – and there were books on ‘warfare strategies for marketing’. In leadership he noted that people often reverted to sporting metaphors.

Over his career, he had been inspired by a number of people – Professor Leslie Vaughan, his PhD mentor; Dr Rick LeCouteur, a veterinary neurologist at the University of California–Davis; Ian Griffiths, veterinary neurologist at Glasgow Vet School; and George Gunn, who had managed Novartis Animal Health. To him, these people had shown great leadership, although their approaches had been very different. Leadership came in different forms, all of which were equally valuable, he said.

However, he had also experienced ‘less glorious’ leadership and had found it hard to deal with.

So what was leadership? Dr Wheeler quoted a former principal of the Royal Veterinary College, who had said that “leadership is a difficult thing to define, but you know when you are in its presence” – before appending his own extension to the quote, “and you also know when you are not!”

In situations where leadership was not good, it was important to be resilient. He welcomed the work being done by the RCVS on leadership, saying he believed resilience and the ability to deal with difficult circumstances was an important aspect of this.

Leadership and the quality of leadership was intrinsically linked to organisational culture; good leadership went with a good culture and vice versa. The culture of an organisation could be very difficult to change and, while it was usually said that the culture came from the leadership, he had seen situations where well-respected leaders had moved to new organisations and had been ‘virtually destroyed because the culture had been so toxic’.

Dr Wheeler described three types of leadership. The first was the ‘pinnacle’ form of leadership, where someone was leading a team, department or organisation. In this case, situational leadership, the ability of a leader to analyse the needs of each member of their team, to adapt their leadership behaviour accordingly and to take the team forward together, was key. He believed that the essential veterinary skills of taking a history, doing a clinical examination and evaluating and communicating differential diagnoses – all things that vets did inherently – mirrored this ability and were therefore very transferable into business.

The second form of leadership was key opinion leadership. This was a very important issue for the Fellowship and he advised Fellows to ensure that their thoughts and opinions were grounded in the truth and also to remember that they had a responsibility to themselves, to their audience, and to the Fellowship itself.

The final form of leadership he mentioned was ‘leadership of self’, and leading by example.

He concluded with a plea that any training or course to emerge from the ongoing RCVS work on leadership should not be ‘something that you could fail’.