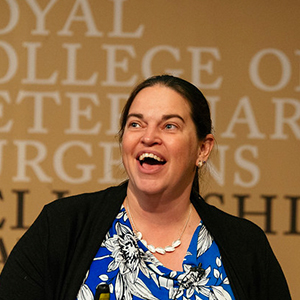 Physical examination is a skill that is needed by vets at all stages of their careers, said Gayle Hallowell (pictured), Professor of Veterinary Internal Medicine and Critical Care at the University of Nottingham.

She had once been told that the differences between animal species came down to the findings from physical examination and the subsequent differential diagnoses, and she maintained this belief in her current approach to the different species that she examined and treated. The skills of physical examination had been emphasised during her undergraduate training at the University of Cambridge, and senior members of staff had devoted large amounts of time to teaching this to small groups of students. Throughout her career, she had been inspired by colleagues to ‘really push’ what she could achieve through physical examination.

The skills of the modern physical examination dated back to 1761, when the physician Leopold Auenbrugger published a treatise, ‘Inventum Novum’, describing the technique of percussion of the thorax. In 1819, René Laennec, a French physician, described his invention of the stethoscope. The ophthalmoscope was invented in 1850, the thermometer in 1871, the hammer for testing tendon reflexes in 1875 and, by 1896, blood pressure could be measured in a non-invasive manner.

Commenting that there was a great deal of emphasis on Day One Competences for new graduates, she argued that, without fundamental skills in physical examination that allowed identification of the likely body system affected and, therefore, the differential diagnoses, many of these competences were ‘largely fruitless’.

However, with more students than ever at veterinary schools, it was becoming harder to find the time and staff availability to teach physical examination skills. The extra time needed to teach increasing numbers of students would come at the cost of something else, she said. Could veterinary schools continue to value and justify teaching this essential skill? Would senior academics still give up their time to teach the next generation of vets, or would they delegate it to junior, or non-clinical members of staff? If that happened, the skill of physical examination would continue to ‘decline and fall’, she said.

Engaging technologically aspirational students in the importance of the physical examination was a challenge, as was getting them to understand the value of examining normal animals so they could then appreciate variations on normal and ultimately identify disease. If students saw vets ‘go through the motions’ of performing a physical examination in 60 seconds or two minutes, they would think they could do the same. Many students, she suggested, felt that physical examination skills would be ‘bestowed upon them’ once they had qualified – but that was not always the case.

Professor Gayle also wondered whether some educators were more focused on technology than on the fundamental observation and listening skills underlying the physical examination. For many vets, physical examination was a skilful technique but ‘not very techy’ in a technological age. Many practices, when advertising jobs, were keen to list the technology that they offered; there was often no mention of how much time was dedicated to examination of animals and use of a stethoscope, she said.

That said, perhaps technological advances could improve engagement. For example, apps were already available to video animals before and after the administration of local anaesthetic, and perhaps this type of technology could be extended. It might also be possible to go further and use things like 4D simulators, such as those used in military medical settings. Artificial intelligence would also be increasingly used in the teaching of veterinary medicine, she said.

Some technology, therefore, was extremely valuable and timesaving and could give useful information about a case. Looking to the future, there were areas where computers and artificial intelligence would have a significant role in veterinary medicine, she said, but questions if they could ever replace the physical examination. Professor Gayle believed that it was their skills in physical examination that made vets what they are and not technicians - observing and listening was what made them special.

Dealing with the worm that turned
Print