Dealing with the worm that turned 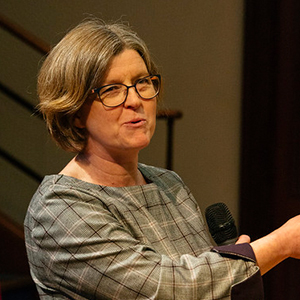 Having ‘met worms’ in her third year at vet school, ‘that was it for me’, said Professor Jacqui Matthews (pictured), leader of PARAGONE, a multinational parasite vaccine research programme based at the Moredun Research Institute near Edinburgh.

In many cases of parasitic infection, particularly those of livestock and equids (her particular areas of interest), ‘we know that the drugs just don’t work anymore’, she said. There were classes of anthelmintics for horses and cattle that were ‘pretty old now’, and no new products were on the horizon. Resistance had already been detected to the two new classes of anthelmintic developed for sheep in the past seven years. So where did the future of parasite control lie?

An integrated approach would be essential, she said. Drugs would have to be targeted in a much more evidence-based manner. She pointed out that, within a group of animals with worm infections, only about 20% would have burdens that actually needed treatment. The remainder would have either no worms or only a low burden that would cause no pathology or disease. To target the use of anthelmintics to the animals that needed treatment, robust diagnostics giving reliable results were required.

She spent much of her time trying to make existing diagnostic tests more robust and also developing new tests to address gaps in diagnostics. However, a large part of her research involved searching for the ‘holy grail’ of a vaccine against the sheep stomach worm Teladorsagia. Researchers had to ‘get to know’ the worm they were working on, she said, and understand the genes and proteins produced by the parasite as well as the molecules it expressed at important stages of its lifecycle. A vaccine could stimulate an immune response in the host against these molecules, ‘knocking out’ the worm at a particular point in its lifecycle.

Mapping the genome of Teladorsagia had led to a cocktail of eight proteins that were either strongly recognised by immune sheep, or could be immunosuppressive – parasites were clever, she pointed out, and could also downregulate an immune response. This resulted in a vaccine that reduced worm egg counts significantly in vaccinated versus unvaccinated sheep, providing the first evidence of a subunit nematode vaccine that could produce protection.

In further research, Professor Matthews had studied the impact of the vaccine in different groups and breeds of sheep. Young lambs did not respond well, she reported. However, it had been shown that the vaccine had a significant effect on an animal’s egg shedding and its worm burden after challenge.

It was known that ewes’ immunity against parasites decreased around lambing time and also that the parasites shed large numbers of eggs, resulting in pasture contamination that affected lambs. Further research had investigated whether it was possible to downgrade this relaxation in immunity.

More recently, having teamed up with a company to commercialise the vaccine, the aim had been to reduce the number of proteins it contained. Eight proteins was ‘quite a lot to produce commercially’, she said, and it had actually been possible to reduce this to two proteins that still reduced egg shedding significantly in vaccinated lambs versus controls.

However, vaccines would not be a ‘magic bullet’, and would probably have an efficacy of around 50% to 70%. A balanced programme of worm control would be needed going forward, incorporating the use of vaccines as the effectiveness of existing anthelmintic drugs declined.

The vaccine was currently being tested under different climatic and management conditions.

Turning to the control of worms in horses, Professor Matthews explained that she had spent a lot of time looking at best practice and how diagnostics and prescribing protocols could be used to reduce the use of anthelmintics by targeting horses based on faecal worm egg counts. In this way it was possible to reduce anthelmintic treatments by 80% to 90%, she said.

However, there were limitations to looking only at egg shedding in horses, she said. A horse could have a large burden of immature larvae in its intestinal wall, but show only a low faecal egg count. These horses could suffer from severe, even fatal, disease. Therefore, work was ongoing to develop tests that would pick up horses with parasitic infections that could not be detected simply by looking at worm egg counts in dung. A cocktail of diagnostic antigens had been identified and could be used to screen infected horses from uninfected horses. She hoped that a diagnostic test would be commercialised in the next year or so, making it possible for vets to send a blood sample from a horse to a diagnostic laboratory for testing. Ultimately, it was hoped that the test could be developed further into an on-farm test that prescribers could use to inform treatment for worms at various stages of their lifecycle.

Concluding, Professor Matthews said that applying best practice based on a sound evidence base was vital, and it was no longer appropriate to simply treat every horse every six to eight weeks.