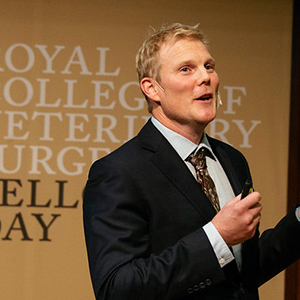 Every vet seems to have a story about international work, said Luke Gamble (pictured), Principal of a mixed practice in the New Forest and founder of the international charities Worldwide Veterinary Service (WVS) and Mission Rabies. So, rather than focus on any particular project that he had been involved with, he thought it would be more interesting to give his audience an insight into all of the factors that had to be considered when setting up an international animal welfare project.

The foundation of every project was the initial idea. Ideas often came quite spontaneously – the inspiration for WVS’s international training centres, for example, had come after he had been involved in a road traffic accident at 2am one morning. WVS now had three international training centres in India and Thailand, giving more than 700 vets, vet students and vet nurses each year the chance to practise or refresh their key surgical skills. Furthermore, a project to eliminate rabies from Blantyre in Malawi had been inspired by correspondence in The Lancet in which doctors at the city’s Queen Elizabeth Hospital reported that the hospital had the highest incidence of child rabies deaths of any single institution in the whole of Africa.

He encouraged his audience to propose ideas for a new project by asking them to think about places they had been in the past 18 months where they had seen an animal welfare issue that needed to be addressed. Donkey welfare in Ethiopia was the suggestion made.

The first thing to consider was due diligence, he said; in this case, was Ethiopia a safe place to visit? For example, was it a war zone? Ethiopia was a complicated location, he commented, but if the right location could be found, it would be possible to work there.

The next key consideration was the team – everything was about the team. He said this was where the veterinary profession was ‘awesome’; it had a common unity and a strength of purpose that drove people to become involved in projects such as those run by WVS and Mission Rabies. On every trip and project he had undertaken, he had learned something new and been inspired by his peers. He valued the support offered by the profession, saying that he knew that if he ‘got into a fix’, he could ask colleagues for help, as they could ask him.

Logistics were vital – not only things like flights, but also infrastructure in the area where a project was based. Working with a local animal welfare organisation was key to this – whether that be a local charity, or perhaps a vet school, or even just an individual who was trying to make a difference.

Then there was the issue of funding. Getting an initial grant was usually fairly straightforward, he said, but obtaining ongoing grants to make a project sustainable was much harder, unless the impact of that project could be clearly demonstrated. WVS and Mission Rabies now used a bespoke smartphone app that allowed project workers to collect data on everything they did. For instance, the app had been used to record the incidence of mutilations in donkeys in Tamil Nadu in India and to secure funding to support a programme to improve their welfare. It had also been used to gather the data that demonstrated the progress of Mission Rabies’ work in Blantyre, Malawi, which had resulted in the incidence of child rabies deaths in the Queen Elizabeth Hospital falling to one of the lowest in Africa.

The information gathered by the app therefore provided the cornerstone on which a case for ongoing funding for a project could be built.

The final element of any project was evolution. All projects attracted criticism in one form or another, and those behind a project would have to be able to take that criticism. The fact that someone had cared enough to make the criticism in the first place, however, should act as a spur to making a project better, he said. For example, in Blantyre, Mission Rabies had vaccinated over 30,000 dogs in 20 days each year for three years, but someone had criticised them for ‘taking your time’. This had inspired the charity to set up more vaccination points throughout the city the following year, resulting in the same number of dogs being vaccinated in just 12 days. The project in Blantyre had now expanded to cover neighbouring districts and surrounding rural areas. It was essential to keeping asking how more could be achieved, he said.

Concluding, Dr Gamble hoped that the insight he had given into how international projects came about, were structured and evolved, and how the ‘amazing’ veterinary profession played such a valuable role, had shown that, as long as those behind the projects were ‘powered by passion and driven by results’, they could achieve anything.

Is the art of the physical exam dying?
Print