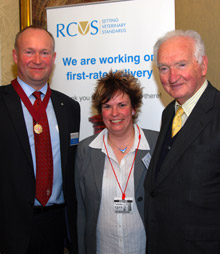 President Col Neil Smith launched a new College honour, the RCVS Queen’s Medal, at an event in the House of Lords today.

“It is a great privilege to launch this historic and inspiring new honour during my presidency," he said.

"The Queen’s Medal will be the most prestigious honour that the RCVS can bestow upon a veterinary surgeon and will be reserved for those whose distinguished careers and outstanding lifetime achievements deserve wider recognition.”

The honour was created following a review of our honours system, which demonstrated the need for a new aspirational award.

We wrote to the Cabinet Office last year, together with letters of support from Peers and MPs, many of whom attended the reception, to request permission to name this new honour after Her Majesty the Queen.

“We are honoured that Her Majesty has supported the proposal and allowed the College to name the award after her, and express our sincere thanks to those Parliamentarians who supported our endeavour,” added Neil (pictured right with Lord Mackay and Ruth Mackay MRCVS).

The launch event was attended by parliamentarians and representatives of the profession, who were asked to assist the College in ensuring that it receives a strong portfolio of nominations for the honour, so that the first Medal may be awarded to a deserving candidate.

The deadline for nominations is 15 January 2014, and the first RCVS Queen’s Medal will be presented at RCVS Day in July 2014.

Speaking at the reception, Lord Mackay of Clashfern said: “I am delighted to be hosting the launch of the RCVS Queen’s Medal.  Having watched my own daughter train and practice as a veterinary surgeon I am fully aware of both the great efforts involved and the very important contribution that veterinary surgeons make to society.”

You can download the nomination form for the Queen’s Medal. 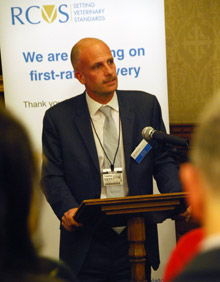 The event also provided the opportunity for CEO, Nick Stace, to introduce our new three-year Strategic Plan, which sets out a series of ambitious reforms that will allow the College to become an exemplar of best regulatory practice.

Read more about the Strategic Plan and download a copy.