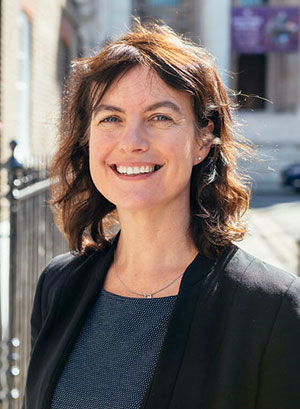 Georgie Barnard is Chief Executive for the West End Security Group whose primary purpose is to strengthen the ability of its members and partners to resist, respond, react to and recover from a terrorist attack or major incident. She has a background in law enforcement and as a senior Detective set up and led the first ever National Business Crime Centre for the UK, aimed at supporting all law enforcement and national businesses to tackle cyber and organised crime.

A police officer for over 30 years, she moved from front line policing to become a Detective, working within the Sexual Offences Command, Domestic Violence, Intelligence, and Counter Terrorism where she was part of the national investigation team post London bombings.

Georgie is passionate about maintaining high professional standards and spent many years working for the Metropolitan Police Professional Standards Unit, leading on numerous prolific anti-corruption cases. During the London Olympics, she was seconded to the Security Industry Authority and successfully prosecuted a number of rogue security companies. Georgie continues to work closely with the SIA and currently sits on their Training Standards Board.

Georgie strongly believes in the power of collaboration. She has been responsible for delivering a range of national business crime initiatives by bringing together enforcement agencies and private companies. She set up the national Police and Security Initiative, aimed at improving collaboration between police and private security to improve service delivery to the public.

After many years of working unsociable hours, with 3 daughters, numerous pets and a husband, Georgie values quality family time whenever possible. In her rare spare time, she enjoys running and cooking.