Seats are already being snapped up for the RCVS Share Jo 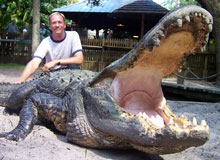 nes Lecture 2011, ‘Who says you can’t be big and nimble? The fragility of giant land animals', which will be given by Professor John Hutchinson on 23 November at the Royal Veterinary College, London.

Tickets are free; space, however, is limited, so those wishing to come are advised to book early.

Professor Hutchinson (pictured right) was proposed for the 2011 lectureship by the former RVC Principal and RCVS Council Member, Professor Quintin McKellar, and has been widely published on subjects ranging from the anatomy and locomotion of dinosaurs and crocodiles, to elephants and broiler chickens.

He is also the associate editor of the Journal of Theoretical Biology and holds a PhD awarded by Berkeley in the ‘Evolution of hindlimb anatomy and function in theropod dinosaurs.’

The lecture will be held at 6pm on 23 November in the Great Hall of the RVC’s Camden Campus, with refreshments offered afterwards.

Tickets will be issued shortly to those who have already booked, and will continue to be issued on a first-come, first-served basis.

The Share Jones Lectureship is awarded biennially by the RCVS to a lecturer who has achieved special eminence in veterinary anatomy.

It offers veterinary surgeons, nurses and students the chance to attend a free lecture given by an academic recognised as amongst the foremost in their field.

Professor Share Jones, at whose behest the lectureship was founded, was one of the founders of the University of Liverpool’s Faculty of Veterinary Science.