We have published a report on our fourth survey on the economic impact of the Covid-19 pandemic on veterinary practice. 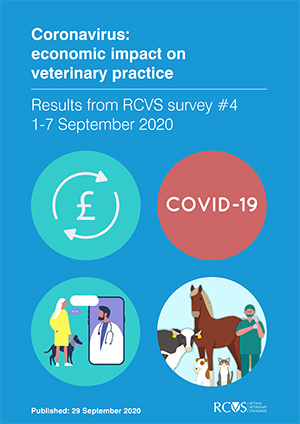 The survey was conducted between 1 and 7 September and was sent to the 3,077 UK veterinary practices for which we hold a unique email address.

Responses to the survey totalled 241, representing an 8% response rate and an increase on the 196 responses gathered in our third survey, held between 12 and 16 June. The first (3-7 April) and second (1-5 May) surveys in the series gathered 532 and 251 responses, respectively.

Among the key findings in the latest report were:

"The results from this latest survey indicate that, for many practices, business continues to progress towards normality, with over half of respondents saying they were delivering a ‘near normal’ service.

"It is heartening to see that cases of staff needing to self-isolate or enter quarantine had decreased, complemented by an equally improving situation regarding furloughed staff – only 10% of practices now had veterinary surgeons on furlough.

"The specific economic impact of the current pandemic on veterinary practices remains stable at this time, with more than three-quarters of respondents noting no negative impact on their practice’s cash flow.

"However, the pandemic is far from over, with many areas of the UK entering into new periods of greater restriction even since our survey was carried out.

"In light of the ever-changing situation and new regulations set out by the four UK governments, we would encourage as many practices as possible to engage with our fifth survey – scheduled for November – to allow us to best gauge developments and identify where support and further guidance is needed.”