Just over one-quarter of veterinary surgeons eligible to vote did so in this year’s election of three candidates to RCVS Council – a record in the recent history of College elections.

There were nine candidates standing in this year’s election, which closed at 5pm on Friday 26 April, and the results, in order of number of votes, are: 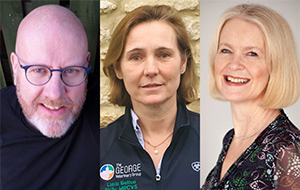 Eleanor Ferguson, RCVS Registrar and Returning Officer for the election, said: “Congratulations to Niall and Jo for being re-elected to Council and congratulations also to Linda who we look forward to welcoming to Council at this year’s Royal College Day on Friday 12 July. I would also like to thank Kate, Tim and Peter for their contributions during their time on Council and give my commiserations to them and the other candidates who were unsuccessful this year.

“I was delighted to see that, this year, we had over a quarter of those eligible to vote doing so which means both a record number of votes and a record turnout –it seems this was assisted by our email reminders which, each time they were sent out, lead to a significant boost in  uptake.

“However, we will not rest on our laurels and will continue to think about how we can further improve engagement in the election process and turnout for subsequent years.”

The results of the election will be formally declared at this year’s Royal College Day – our Annual General Meeting and awards ceremony – which takes place at the Royal Institute of British Architects on Friday 12 July 2019 where the successful candidates will also start their new four-year terms.

No election to Veterinary Nursing Council was held this year due to the fact that there were only two candidates – Liz Cox and Jane Davidson – standing for the two elected places. Both Liz and Jane will take up their three-year terms at Royal College Day.