The Officer Team of the RCVS - comprising President Kate Richards, Senior Vice-President Mandisa Greene, Junior Vice-President Melissa Donald and RCVS Treasurer Niall Connell - have responded to comments made by members of the British Veterinary Association (BVA) Council regarding the Workforce Summit Report as reported recently by the Vet Record. 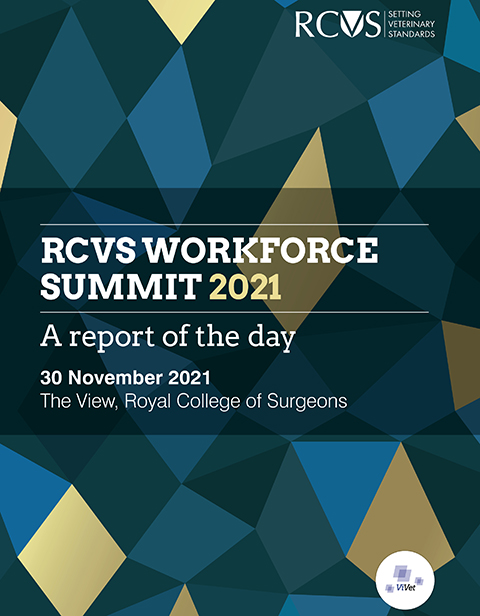 "We were disappointed to read the comments from members of the British Veterinary Association (BVA) Council as reported in the Vet Record (Volume 190, Issue 9, 7/14 May 2022, p 348) regarding the recently published report of the proceedings of the Workforce Summit that took place in November 2021.

"We coordinated the Summit because we were acutely aware that there was, and is, a workforce crisis currently impacting the veterinary professions and that we, as the Royal College and regulatory body, would be well placed to coordinate efforts to tackle the ongoing issues it presents.

"From the outset, we said that there were unlikely to be any ‘silver bullets’ to instantly solve the complex, multifactorial issues behind the workforce crisis, nor was it possible or desirable for all of the solutions to be developed and implemented by the RCVS alone.

"To this end, we wanted the Summit to involve a wide range of stakeholders from across the breadth of the professions – not least representatives of BVA itself – to contribute to the process of identifying the issues and, through ‘design thinking’ techniques suggest potential solutions. Our intention is to take a collaborative and collegiate approach to a crisis we know is impacting so many veterinary professionals currently. We would urge BVA Council members to respect and acknowledge the time that its representatives and those of other organisations took to join the event and contribute to the best of their abilities.

"Regarding the Report itself, it is worth restating that the publication is a faithful report of the key proposals discussed and presented on the day by representatives from across all sectors of the veterinary professions. Delegates were split into six groups, each of which was tasked with looking at an identified area where solutions to the workforce crisis could be found. From these wide-ranging discussions, each group was asked to use ‘design thinking’ methodology and a process of refinement to work up a ‘big idea’ on how to potentially solve some of the challenges facing the professions and then present this idea and the process by which it was arrived at to the rest of those present. Other ideas suggested along the way were also captured and will be fed into ongoing discussions.

"We understand some people might have liked to see other topics or ideas mentioned in the report (including, for example, pay) and they would be extremely welcome to send these to us for consideration, but the report itself is an accurate representation of the ‘big ideas’ proposed by each group on the day.

"It is also important to stress that what is contained in the report are not set-in-stone recommendations or final plans. Each ‘big idea’ is now being looked at further and assessed using a number of criteria including feasibility, desirability, efficacy, risk and whether it is likely to be welcomed by the professions, animal owners and other stakeholders.

"As we continue to work up the draft Action Plan, there will be a further process of finessing and refining these ideas, and we look forward to working with our colleagues in BVA and all veterinary stakeholders during this process."