RCVS Day - an updated Charter and a royal accolade

RCVS Day – our Annual General Meeting and Awards Day – on Friday 11 July 2014 at One Great George Street in Westminster, saw the investiture of Professor Stuart Reid as the new President for 2014/15.

Professor Reid graduated from the University of Glasgow in 1987 and began his professional career at a practice in Aberdeenshire, before returning to his alma mater to complete his PhD in 1992.

Having worked in Africa, Australia and the USA, Stuart became Associate Dean (Research) of Glasgow’s School of Veterinary Medicine in 2004 and then Dean in 2005. He was in this position for six years before becoming Principal of the Royal Veterinary College in 2011.

A Fellow of the Royal Society of Edinburgh since 2001, Stuart is an RCVS Specialist in veterinary epidemiology and a Diplomate of the European College of Veterinary Public Health, for whom he was also the first elected president. 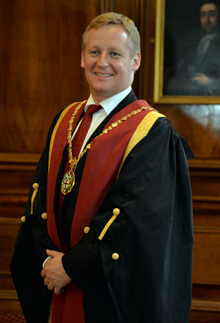 Stuart has been an appointed member of Council since 2005 and has served on a variety of committees, including Chair of both the Education Policy and Specialisation Committee and the Veterinary Legislation Working Party.

Furthermore, he has served on six different veterinary degree accreditation visitation teams on our behalf, both in the UK and overseas.

In taking the role of President, Stuart outlined three areas of consideration that he would like to pursue during his term in office. These are:

Stuart also praised outgoing President Colonel Neil Smith, who will now take on the role of Vice-President, thanking him for all his hard work over the past year.

In addition to Stuart taking up his presidency, Jacqui Molyneux stood down as Vice-President with Neil Smith praising her invaluable “knowledge and determination”.

Neil also welcomed Dr Bradley Viner on board as the second Vice-President as well as his replacement as RCVS Treasurer, Amanda Boag.

The first part of RCVS Day was our Annual General Meeting. After a formal welcome and approval of the minutes of last year’s RCVS Day and the Annual Report and Statement of Accounts for 2013, members of the College who were present were then asked to vote on a motion to formally adopt a new Royal Charter.

The motion, which was proposed by Professor Stuart Reid and seconded by Robin Hargreaves, President of the British Veterinary Association, was passed by unanimous vote.

The proposed new Charter was delivered to the Privy Council that afternoon. Approval should be given later this year or early next year.

In introducing the new Charter, Stuart Reid set out what it would do, including: better defining and clarifying the objects of the College in terms of our statutory role and wider functions; providing a clear framework for our existing functions; the formal recognition of veterinary nurses as a profession and associates of the College; and giving RCVS Council the power to create new classes of associate.

Words like ‘historic’ should be used sparingly, but on this occasion it is justified

Speaking of the impact the Charter would have on the veterinary nursing profession, Professor Stuart Reid said: “Words like ‘historic’ should be used sparingly, but on this occasion it is justified. 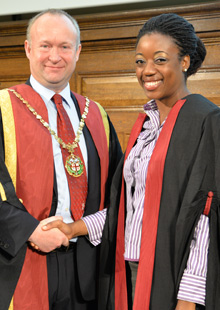 David Bartram, Mandisa Greene (pictured) and Susan Paterson – the three new RCVS Council members elected from the record 19 candidates standing in this year’s elections – were formally welcomed on to Council.

For VN Council, new member Amber Richards was confirmed for her four-year term, as was Hilary Orpet, who was re-elected.

Kathy Kissick was confirmed as Chair of VN Council for a further year, with Liz Cox and Niall Connell as new Vice-Chairs, replacing Liz Branscombe and Christine Shield.

It was confirmed that Neil Smith would also be joining VN Council. 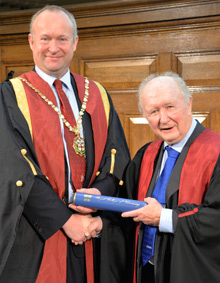 Following the AGM our outgoing President, Neil Smith, conferred a range of awards including, for the first time this year, the Queen’s Medal for a veterinary surgeon who has made a lifetime of outstanding contributions to the profession.

The recipient of the new Queen’s Medal was Des Thompson OBE, a distinguished veterinary surgeon from Northern Ireland and past-President of the RCVS and several other organisations, including the British Small Animal Veterinary Association (BSAVA) and the Society of Practising Veterinary Surgeons (SPVS).

The President commented: “Des was actually nominated twice for the award, and what is clear from both of his nominations is the respect and admiration that the veterinary community in Northern Ireland, and beyond, has for him.”

Des will be visiting Buckingham Palace later this year where he will have the Queen’s Medal officially presented to him by Her Majesty the Queen.

The first was for Mr Andrew Holliman who was praised by Neil Smith as a “highly respected pathologist and a pillar of support to the field veterinarian, providing encouragement and advice beyond the call of duty throughout his career – he is the longest serving Veterinary Investigation Officer in the UK.”

Also highlighted was Mr Holliman’s work as a consultant pathologist during the Foot and Mouth outbreak of 2001, which the President described as “one of his most important career contributions.”

The second Honorary Fellow was Professor Maxwell Murray, Emeritus Professor of Veterinary Medicine and Honorary Senior Research Fellow at the University of Glasgow, who was recognised for his major contributions to research, teaching and international development.

“With supreme leadership qualities, and an ability to recognise and cultivate individuals with talent, Max’s broad knowledge, allied to his enthusiasm and excellent communication skills, have enabled him to be an inspirational teacher at both undergraduate and postgraduate level. Three of his students are now heads of UK vet schools,” said Neil Smith. 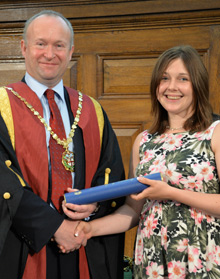 The final Honorary Fellowship was bestowed upon Mr Donald Rutty, a former president of the Laboratory Animal Veterinary Association, praised by Neil Smith as an “exemplary scientist” whose long career in pathology, toxicology and laboratory animal welfare demonstrated the importance of veterinary science within the pharmaceutical industry.

The President added: “Donald was the first veterinary surgeon to obtain membership of the Royal College of Pathologists by examination in 1972 and became a Fellow. He has therefore been able to complete a bridge in the extrapolation from animal-based knowledge to human clinical endeavour – few veterinary surgeons in the UK have been able to make such a contribution.”

Fellowships by Meritorious Contributions to Learning were awarded to Dr Alan Conley for his research on comparative reproductive endocrinology, and Dr Robert Hanna for his research into certain digenetic tremadote parasites in domestic ruminants.

This year the award went to Hayley Walters (pictured below, centre, with her family and friends), an Anaesthesia and Welfare Veterinary Nurse at the University of Edinburgh Hospital for Small Animals and the Jeanne Marchig International Centre for Animal Welfare Education at the Royal (Dick) School of Veterinary Studies. She was recognised for her clinical, education and international outreach work.

The President commented: “Hayley is a veterinary nurse who is dedicated to improving animal welfare and veterinary care both in the UK and abroad, and has demonstrated exceptional contributions to the profession.”

Following the presentation of the awards Katie McConnell, President of the British Small Animal Veterinary Association, donated a copy of every book the association had published in the previous year, plus a selection of books given in memory of Noel Ormrod, to the RCVS Knowledge Library. This donation was gratefully received by Clare Boulton, Head of Library and Information Services at RCVS Knowledge.

Nick Stace, our Chief Executive, then gave an update on what we had achieved in the last year.

We have listened and responded to fair criticism from the profession, including a very productive evidence-gathering session on 24/7 emergency care, which has resulted in important changes.

Among the achievements he noted was the introduction of a new system to reduce the time it takes to process complaints; the imminent launch of the new Advanced Practitioner status; and the development of a new Practice Standards Scheme, due to come into force next year.

He said: “In addition, we have listened and responded to fair criticism from the profession, including a very productive evidence-gathering session on 24/7 emergency care, which has resulted in important changes.

“I believe listening and responding is a sign of strength and confidence. We do not seek to be popular but to be sensible in how we regulate and respectful in how we carry out our Royal College duties.”

He also outlined how he wanted the RCVS to be a “force for good” in the world by supporting the very best veterinary practitioners and ensuring that the public feels properly protected.

He then handed over to the outgoing President Neil Smith for his address. 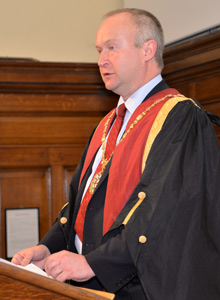 The President began his address by congratulating the award winners and thanking the RCVS staff, Council members and the profession as a whole for their support throughout his tenure.

He also took the opportunity to pay tribute to Peter Hignett, a past-President of the RCVS for 1981/2, who died last August.

He said that, although it was a year of “ups and downs”, there were some particular high points, including his role in admitting new veterinary surgeons and veterinary nurses to the profession, attending the Highlands and Islands Veterinary Services Scheme in Scotland in February this year and meeting new vets at the Recent Graduate seminars.

However, he also pointed out how attending these and other events such as the Regional Question Times and veterinary conferences, had made him aware of issues facing the profession, particularly in terms of mental health. He said that the College, with the Veterinary Benevolent Fund, would be looking into this issue in the future.

Furthermore, he discussed two of the issues during his year in office that had aroused passion within the profession – the 24-hour emergency care review and the debate over which postnominals are published in the Register.

He praised the College’s call for evidence on 24-hour emergency cover as a positive exercise which allowed the profession to voice its frustrations and whose “comprehensive and detailed approach” led to the development of new guidance.

In conclusion he said: “It is almost 25 years to the day since I was admitted to this College, and 10 since I first came on RCVS Council. In the last couple of years I have felt a real change in the way the RCVS does business, we continue to try to engage with the profession, which can be like wading through treacle – and perhaps the feeling is mutual.

“The profession faces challenges, but I am confident that, with the commitment of Council members, the hard work of RCVS staff, and constructive contributions from the profession and public, we will continue to develop, and be able to ensure the health and welfare of animals committed to our care.” 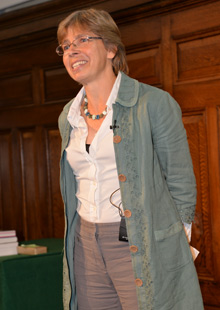 This year’s guest speaker was Professor Sarah Cleaveland OBE (pictured), a veterinary epidemiologist based at the University of Glasgow, who gave a talk entitled ‘International perspectives on zoonotic diseases: tackling complexity through collaboration.’

Sarah's talk drew on her extensive field work in the research of tropical diseases in Tanzania which aims to understand the epidemiology of emerging and neglected tropical diseases and to design disease control strategies to improve human, animal and ecosystem animal health.

In particular she spoke about her work in vaccinating dogs against rabies in poor and isolated villages in Tanzania and how this had led to a reduction in the transmission of the disease to humans through dog bites. She concluded that the eradication of rabies was possible, and that veterinary surgeons could play a key role in this.

View the official RCVS Day photographs on our Flickr photostream.