Fellows of the Future?

After a successful introduction in 2018, RCVS Fellowship Day again showcased the research being undertaken by undergraduate and postgraduate veterinary students across the UK in a ‘Fellows of the Future?’ competition.

The competition aims to encourage those at the very start of their veterinary careers to engage with the RCVS Fellowship and students and recent graduates from all the UK veterinary schools had been encouraged to enter. Sixteen research projects had been submitted, with eight finalists invited to give five-minute presentations at RCVS Fellowship Day. Each finalist was judged on their knowledge of their subject and the quality of their presentation and delivery, as well as on the originality of their projects and their contribution to scientific knowledge and understanding. The judging panel comprised Dr Iain Glen, the keynote speaker at RCVS Fellowship Day, Dr Niall Connell, RCVS President, and Professor Nick Bacon, chair of the RCVS Fellowship Board. 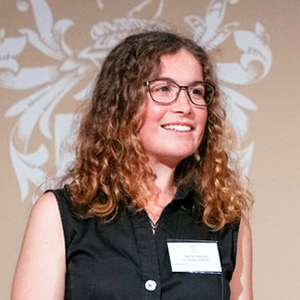 The first student to present her research was Hannah Boocock (pictured) from the University of Surrey, who described the project she had carried out in the third year of her degree course. She had used data collected by the Alborada Trust’s foal microbiome study to examine the prevalence, incidence and temporality of morbidity occurrence in 52 thoroughbred foals in southern England during the first 26 weeks of life. From the data, she had extracted details of different health events experienced by the foals, and had categorised these into seven categories before analysing the incidence, prevalence and temporality of the different types of morbidity. Non-congenital morbidities were found to be more common than congenital morbidities. The most common type of congenital morbidity was limb deformity, while the most common types of non-congenital morbidities were trauma, gastrointestinal disease and respiratory disease. There was also variability in the types of morbidity seen at different points in the foal’s life: gastrointestinal morbidity was more common in the early weeks of life, while respiratory morbidity was more common in older foals. This information could help vets advise owners on what type of morbidity to look out for at different times in a foal’s early life. 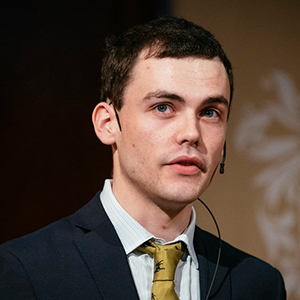 The second presentation was given by Conor Crichton (pictured) from the University of Liverpool. He was interested in the molecular characterisation of canine b-cell lymphoma, specifically a gene known as TRAF3 (TNF receptor-associated factor 3). This gene was involved in encoding a protein that regulated the NF-kappa-B (NF-kB) signal pathway known to be important in the pathogenesis of a subset of both human and canine b-cell lymphomas. On screening 60 canine DNA samples, he found five gene sequence variants, four of which were seen only in b-cell lymphomas. All were inactivating mutations predicted to result in premature truncation of the TRAF3 protein. This was the first UK study to display inactivating mutations in canine TRAF3 and to suggest their role in the pathogenesis of canine b-cell lymphoma. The results also suggested that exon 9 of TRAF3 could be a mutation ‘hotspot’. Knowing the molecular characteristics of a condition helps to classify that disease further and, in turn, allows better prediction of the disease course, better tailoring of pre-existing treatments, and the development of new, targeted drugs.

Feline gait was the subject of the third presentation, given by Nathalie Dowgray from the University of Liverpool. She was using a pressure-sensitive walkway to study whether cats’ gait changed as they aged. She presented the results from seven cats that had been enrolled in the Feline Healthy Ageing Clinic at Liverpool. Four of the cats showed changes in gait over the course of several annual assessments; two also showed a reduced range of motion in their joints on orthopaedic examination at their final gait assessment, having shown no evidence of lameness at an initial orthopaedic examination. Ultimately, Dr Dowgray was hoping to show that changes in gait over time might aid the early detection of orthopaedic or musculoskeletal diseases in cats as they age.

The fourth Fellow of the Future finalist was Luke Dutton, a PhD student at the Royal Veterinary College, who used gene editing to explore therapeutic targets for hypertrophic cardiomyopathy in cats. He explained that in at least two breeds of cats a genetic mutation caused hypertrophic cardiomyopathy – this mutation was a single letter change in the gene encoding for myosin binding protein C (MYBPC3), a protein in the heart. However, it was not known how this mutation resulted in disease. He was using the CRISPR (clustered regularly interspaced short palindromic repeat) gene editing technique to introduce different mutations in the gene and studying their effects at a cellular level. Knowing how a mutation might cause disease in cats could lead to new targets for drugs to treat the condition. 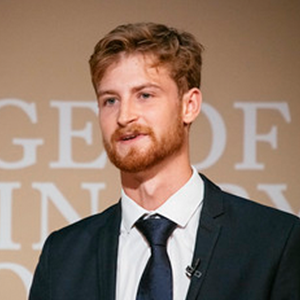 Next up was Luke Gunter (pictured), from the Royal Veterinary College. His research had examined the effects of FSTL3 deletion on trophoblast migration. He explained that trophoblast migration played a key role in successful vascularisation of the placenta in mammals, and impairment of placental infusion as a consequence of dysregulation of trophoblast migration could lead to conditions such as preeclampsia. He described the relationships between the genes FSTL3, sirt1 and Fmnl2 and the protein activin and how these might influence trophoblast migration. He had looked at gene expression in two murine placenta cell lines – one ‘knockout’ cell line which lacked functional FSTL3 and one wildtype cell line with functional FSTL3  – and found evidence that expression of sirt1 and Fmnl2 was downregulated in the knockout line. He described a potential mechanism that might explain his findings and suggested that further work could help elucidate how exactly the various genes and proteins interacted.

“Reptiles in general present with very few clinical signs when they are ill; a very ill turtle can look very much like a dead turtle, and it can look like that for a very long time before it becomes a dead turtle,” said Charlotte Lewis from the Royal Veterinary College, the sixth Fellow of the Future finalist. In a rescue centre with limited resources, how long should a sick turtle be kept before a decision was made to euthanase it? In her research, she was looking for objective, cost-effective measurements that might indicate whether a turtle stood a good chance of survival. Albumin had been found to be a promising prognostic indicator, but there was no reliable assay for determining plasma albumin levels in reptiles. In humans bromocresol green (BCG) dye binding was used to measure albumin, but BCG was known to hugely overestimate levels in reptiles. She was investigating whether an alternative dye, bromocresol purple (BCP), would be more accurate. In blood samples from 21 loggerhead turtles albumin levels assessed by BCG were consistently higher than those assessed using BCP. Plasma protein electrophoresis would be performed on the samples to provide an accurate measure of albumin and this would then be compared with the levels estimated by the two dyes. Total protein refractometry had also been performed, and the values generated using BCP correlated more closely with these results than those generated using BCG. This suggested that BCP might be more a reliable indicator for albumin in turtles and other reptile species. 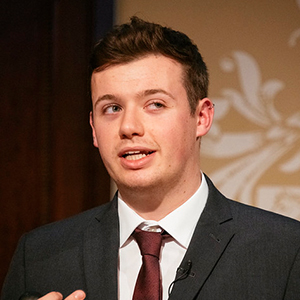 Undergraduate James Statton (pictured) of the University of Nottingham was the penultimate finalist. He described his study of whether the reality of veterinary school matched the expectations of individuals making the transition from school to vet student. This transition was hugely significant for students, he said, as they had to adjust not only to a new academic environment but also to new social surroundings. He had initiated a discussion forum for students on Facebook as a novel way of collecting data; analysis of the discussions had revealed three main themes – surprise and uncertainty, independence and responsibility, and work-life balance. Students talked of their surprise about things such as the amount of content in the course, the level of independent study required, and the uncertainty arising from a loss of the guidance they had been used to at school. They often felt unprepared, and struggled with independent learning, the increased responsibility for their own learning and adjusting to the new pressures of university life and study. The importance of the student community in supporting one another was also clear from his study. He had found evidence of a misalignment between school-based education and veterinary-based education and suggested that there was scope for collaboration between schools and veterinary schools to help smooth the transition from one to the other.

The final potential Fellow of the Future was Dylan Yaffy, from the Royal Veterinary College, who described a mathematical model he had developed to predict the risk of highly pathogenic avian influenza (HPAI) arriving in a country. He had used real-time migration data collected in Croatia to analyse how HPAI outbreaks were linked to migration and mortality in wild birds and backyard poultry. The model predicted the risk of HPAI outbreaks, allowing assessment of whether the risk in a particular year was high or low. This meant that risk-based control strategies could be implemented if required – for instance, birds could be kept inside, or active surveillance for HPAI could be instituted to increase the likelihood of disease being detected quickly.

Describing all the presentations and projects as being of a really high standard, Professor Bacon said that it had been a difficult task to decide on the winners. However, the judges had chosen James Statton as the winner of the 2019 Fellows of the Future? competition. Professor Bacon said that James had given an excellent presentation and that his findings could have an important impact on both students and the future of the profession. James received a £200 voucher for Blackwell’s bookshop. Luke Gunter was chosen as the runner up and received a £100 voucher.