The importance of public engagement in science 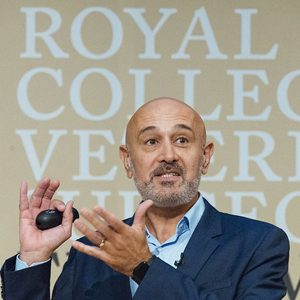 Jim Al-Khalili, Professor of Physics and Public Engagement in Science at the University of Surrey and presenter of BBC Radio 4’s ‘The Life Scientific’, delivered the keynote address at RCVS Fellowship Day. Taking the importance of engaging the public with science as his theme, he began by referring to some of the presentations given earlier at Fellowship Day, saying it was clear that, like him, the veterinary profession believed in evidence-based science and in communicating that science more broadly.

Being able to communicate effectively with wider society helped scientists be transparent about their work, change attitudes and opinions, and justify what they did.

“Communicating science, to a large extent, has to be through the media,” he said. “There are ‘sexy’ subjects in science that journalists will pick up on... but sometimes we have to work harder to get our message across.’

Referring to the Rede Lecture of 1959, in which the novelist and scientist C. P. Snow had described science and the arts as two separate cultures, Professor Al-Khalili said that times had changed; science and conversations about science were gradually becoming part of popular culture in the UK. “Why shouldn’t we be talking about the latest scientific discovery in the same way as we talk about last night’s football, or politics, or an article, or the cinema?” he asked.

When he had first become interested in communicating science to the public in the 1980s and 1990s, things had been different. His senior colleagues had advised him that he should be building his academic reputation rather than visiting schools or talking with journalists. However, he had enjoyed this, so continued to do it ‘under the radar’.

He had quickly learned that while the media were not looking to deliberately destroy a scientist’s career or reputation, neither were they seeking to champion and promote someone’s research. His research field is nuclear physics and, in the late 1990s, he had been part of a Europe-wide collaboration that had decided it needed a public-facing message to dispel the negative connotations associated with the word ‘nuclear’. An article appeared on the front page of The Independent, based on an interview given to a journalist. However, while the article itself had been sound, the headline put on it by a subeditor had read ‘Scientists want to “nuke” their image’ – which had “defeated the whole object of what we were trying to do”, he said.

“They [journalists] want a story,” he said, “and if they can see a way of somehow tweaking the message that you’re giving them because it will make a more interesting story, particularly in these days of click-bait and online news, then they will do it. In a sense, you have to give them the story ‘ready-made’ and make sure there is no room for them to distort it.”

When he had started out in science communication, the approach had been ‘the public doesn’t understand, so we have to tell them what it’s all about’. The scientists had been viewed as the experts and wider society as the ‘empty vessels’ that had to be filled with their knowledge and wisdom. The focus had been on the public understanding of science; this then gradually changed to encourage public engagement in science. A two-way dialogue was being established, allowing the public to voice their concerns and to be actively involved in discussing what interested them and what they wanted to find out about.

The movement to encourage public understanding of science had begun in academia, and some UK universities had begun to embrace it, creating a few positions of ‘professor for the public understanding of science’. This had changed completely in the past 25 years and the UK now led the world in public engagement in science. Professor Al-Khalili discussed 10 reasons why he believed this was the case.

The first reason he gave was the lessons that had been learned from the mistakes of the past. Citing examples such as the negative debates on genetic modification, the MMR vaccine and the BSE crisis, he said: “There are lots of examples… where you look back and think ‘Why didn’t we as a community engage more honestly, more openly, more transparently on some of these topics?’”

Now, communication had improved, and conversations on sensitive or controversial topics were taking place.

The second reason why public engagement in science had developed was the boom in popular science books. “Everyone is writing books now,” he commented. These were opening science up to a much broader audience and, while popular science writing was growing in other countries, many of the books available tended to be translations of those published in the UK and the USA.

The rise of the internet was the third reason cited by Professor Al-Khalili. The accessibility of the internet and social media – YouTube, blogs, Twitter, Facebook – meant that information was at everyone’s fingertips. This also brought the danger that there was ‘nonsense intermingled with the good information’ and not everyone had the expertise to discern one from the other. “We’re still finding our way in how we split up what is fake news from what is useful information,” he said.
As his fourth reason, Professor Al-Khalili explained that engaging with the public was now respected academically. There were a number of high-profile scientists and academics in these public-facing roles now and, unlike his early experience, he said: “If you become a science communicator you are no longer black-balled by the rest of the science community.”

The rise of science festivals was another reason why the UK led the way in public engagement in science. While these events were to some extent ‘preaching to the converted’, they also allowed people to see scientists directly and hear them speak about their work.

Communicating science was more than just making TV programmes, giving lectures or writing books, however. Being able to get across messages that could be widely understood was key. Organisations such as the Science Media Centre, which helped link the professional scientific community with the media, were a further reason for the UK’s success in engaging the public in science.

The next reason given by Professor Al-Khalili was the increasing number of organisations that encourage universities to engage more widely. Some link the scientific community with policy makers and politicians, while others encourage public engagement in academia. Most universities now acknowledge the importance of wider engagement. He was a member of CASE, the Campaign for Science and Engineering, a body that helps science, academia and government interact.

The Research Excellence Framework, under which the academic disciplines in a university had to make the case for their research, had also helped in boosting the credibility of public engagement. The impact of the research was one of the criteria on which it was evaluated, and this included impact through inspiring wider society, or getting more schoolchildren wanting to study a scientific subject.

The penultimate reason he discussed could be summarised as ‘geekiness has become cool!’ Referring to what he called ‘the Sheldon effect’, after the character in the popular US series ‘The Big Bang Theory’, he explained that, unlike in the past where anyone studying a science was referred to as a ‘boffin’, nowadays science and those studying a scientific subject were seen as ‘cool’. “That’s not a bad thing,” he said, “although we also want to show that people working in science are just people” and not “great geniuses that we could never aspire to become”.

The final reason was the integration of science into popular culture. Many popular comedians were championing rationalism and science and many actually had scientific backgrounds. They could present complex ideas and some of the fascinating stories in science in ways that the scientists themselves would be unable to. It was important to find ways to counter the rise of populist ideologies based on opinion rather than facts. “You can’t sit down with a conspiracy theorist and persuade them that they’re wrong,” he said. “You have to find other ways of engaging them.”

Professor Al-Khalili then discussed why a scientifically literate society was important. The world was facing some fundamental challenges and “science is going to have to play a big role in helping the world redress those,” he said. These challenges included a growing global population, with ever-increasing demand for food, water and energy, set against a background of climate change. “Science and engineering is going to have to be used to address some of these challenges,” he added.

Further challenges included those from rapidly developing technology, such as artificial intelligence (AI) and robotics, cybersecurity and genetic engineering, and those related to an aging population, such as dementia. There was also antimicrobial resistance and the problems that it could cause.

“Engaging with wider society about many of these issues in science and what we do is probably more vital now than ever,” he said.

For the final part of his lecture, Professor Al-Khalili focused on AI. Noting that the internet had existed for 25 years, he predicted, “Artificial intelligence could very well change our world and change our lives more than the internet has… but it will do so in less than 25 years because the rate at which AI and machine learning and neural networks are improving and developing and integrating with so many different areas of our lives is really, really fast.’

He then asked if scientists are doing enough to help the public understand and engage with this technology.

There was concern that AI would take over the less skilled jobs in society. This was nothing new; technology had always replaced roles previously done by people and, generally, it had made lives easier. AI was no different, but no one knew the extent to which it would replace human beings. Rudimentary intuition had already been exhibited by machine learning algorithms. Robotics, automation, augmented reality and virtual reality would inevitably become increasingly prevalent and work alongside people to make jobs more efficient and more accurate.

Referring to a press briefing he had given to highlight the British Science Festival, he said he had pointed out that “AI is coming at us very fast, but I worry that wider society isn’t ready for it, that we are not engaging enough with the public about what AI is and how AI is going to transform our lives.”

The danger, he had explained, was that if the public turned away from AI, or if there was a backlash against it, or if governments saw it as less of a priority, the technology would continue to advance unabated, but it would be in the hands of a few powerful companies, which would increasingly make use of all the data they gathered about people. While ‘big data’ could bring many benefits, he felt it was vital that there were regulations in place to govern who owned that data.

“Of all the public engagement activities that we do – while it is fun talking about gravitational waves and Higgs bosons, and so on – what’s more important is that we talk about some of the wider implications of these new technologies that are just around the corner,” he added.

Summing up, Professor Al-Khalili said that it had become easier than ever before for scientists to engage with wider society and get their message across, and that the public were more receptive and had more of an appetite for hearing about scientific ideas. On the other hand, there had been a rise in pseudoscientific ideas, which needed addressing.

“When you have big issues like AI coming at us very fast, how do we engage with the public? We can’t just say ‘Well, if you’re going to think it’s all fake news, then I’m not going to bother talking to you.’