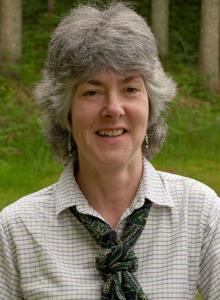 Judith Webb has been self-employed for the last 20 years as an environmental consultant primarily involved in woodland & conservation practical management advice and contracting, also chairing and facilitation of a wide range of stakeholder / partnership groups including Deer Initiative Best Practice Group, England Woodland Biodiversity Group and the National Tree Safety Group. She is a part-time forestry lecturer and sits on several professional conduct regulatory panels.

Judith has also worked in the public and private sectors in England, Scotland and Wales, mostly woodland or farming linked, including as a farm conservation adviser, an urban fringe land management project officer, a local authority forestry officer and as technical & policy adviser on forestry & woodlands for the Confederation of Forest Industries and the Country Land & Business Association.

Judith holds, and has held, a number of public appointments, and is currently a Board member of the Cairngorms National Park Authority and a member of the Independent Agricultural Appeals Panel. Former appointments include Chairing Defra’s Rural Development Service during its transition into Natural England, Deputy Chair of the Joint Nature Conservation Committee and a Forestry Commissioner.

Judith used to farm part-time and has been involved in the establishment of a number of bodies including the Small Woods Association, the Deer Initiative and the England Forest Industries Partnership.

She has also been involved in the Women in Science Engineering and Technology Initiative and as a public appointments ambassador and mentor.